For once my ABC Wednesday entry will not involve photography.  And definitely no pictures of my cats.  Instead, I would like to lodge a complaint about the falling standards of literary vampires.  I was in W H Smith's yesterday looking for a book for a friend, and what I couldn't get over was how many supernatural themed novels there were.  Especially vampires - they're everywhere (as Pepper demonstrates...), oh damn, ok so I probably lied about the photo and the cat thing... 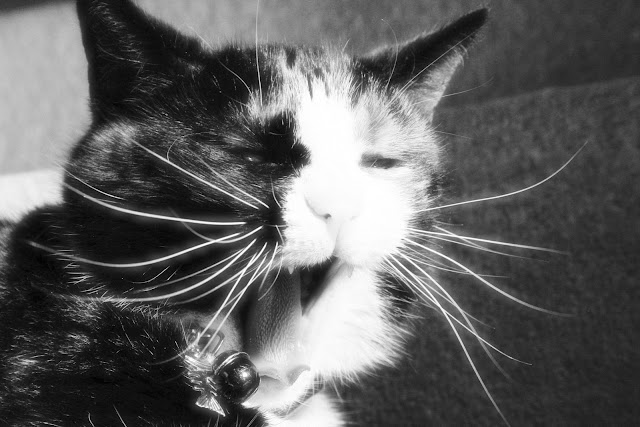 Pepper the Vampire Cat about to claim another victim...
Call me a purist but I like my vampires with a hint of the dark and dangerous about them, a strange 'otherness', that both fascinates and repels.  I want them to symbolise our darkest fears about death, about  'un-being', all wrapped in a strange eroticism.  Now what do I find?  That instead of the foreign, aristocratic yet compelling Dracula created by Bram Stoker, we have the tiresome teenagers of Stephanie Myer's novels (I use the term loosely).

Ever since Polidori's The Vampyr, there seem to have been points in history where the figure of the vampire seems to resonate strongly in our society, so just what is it in our fast-moving, technological age that has brought about the plethora of books dealing with the subject (apart from wanting to jump on the Twilight bandwagon and make as much money as possible)?  In a section of his fascinating essay 'Aftergothic: consumption, machines, and black holes', Fred Botting's theory is that we are living in Gothic times where what was once marginal becomes the norm.  What was once dark and dangerous becomes acceptable so that 'Vampires saturate contemporary culture and provide a normative image of the latter-day consumer'.  An  example being of Anne Rice's vampire's living in a decadent world of conspicuous consumption, and where in the film version of Interview with the Vampire, Brad Pitt and Tom Cruise became the acceptable faces of the undead (I am saying nothing!!).

I suppose the rot started with Buffy, although I loved the programme for being funny and sassy.  But Buffy had a few undead boyfriends and no-one seemed to turn a hair at the thought (can you imagine Dracula being described as anyone's boyfriend?  He'd turn in his grave... well, if not his grave then wherever his coffin was being stored that particular night anyway...).  Now with Twilight etc, vampires seem to merely symbolise teenage angst, a rebellion against parental control and morality.  A case of society getting the vampires it deserves? I have to say it's a bit of a come-down - bring back Nosferatu all is forgiven.  Coffin-dwelling, night-crawling, blood-suckers just aren't what they used to be...

You managed to FIND some books in WHS? Well done!

I think your initial reaction is the big thing - jumping on the money-making bandwagon. We can take comfort in the reality that the truly good vampire novels will last; Buffy, Twilight, et al will not. It's as much a fad as tie dyed shirts were in the 60s.

Also, I thought Dracula was sexy in a dangerous way, but these Twilight boys? Meh.
ROG, ABC Wednesday team

I have never read a vampire book or watched a movie of one, not even Dracula. Not my cup of tea, or is that blood? YUCK!!!

I echo Gigi Ann and eeeks!! vampires are not for me either.

I have no interest in reading about vampires for my entertainment! I have enough dragons/vampires without spending my reading time with them as well! Terrific post for the day! Rant on, my friend!! And have a great vampire free day!!

I read a book earlier this year where Jane Austen is a vampire! It was a good book, but I do agree with you: everybody is jumping on the bandwagon and it's getting a bit tiring.

It seems the word "vampire" stirs the emotions! :)

Not so fond of vampires - even the good ones. :) Good rant, though -

Hear hear, well put, those wimpy modern day vampires, I lost patience with them after the first episode though was rather fond of the Buffy series, I think it was the underlying humour. Luckily I've only ever read Bram Stoker and missed out on Meyer but Bela Lugosi was my favourite film vampire, "listen to them, the children of the night. what music they make"

We are not far from Whitby where there is the Dracula Experience should you ever be passing! I would love to show you round!
Denise
ABC Team

You hit the nail on the head.... Very interesting read, and I must say I'm on the same page as you!!

The vampire cat photo is too funny!!!

As someone turned-off by anything supernatural, I never go anywhere near anything with the word 'vampire' in the title!

I'm a sucker for vampire stories too. I have read and re-read Dracula by Bram Stoker and when I read the Twilight series, all I could think of was - "Where's the mystery?"

If you have time, do drop by my rant for today:

Crikey - Vampires seem to be like Marmite, you either love 'em or hate 'em :O)

Joy, ah yes Bela Lugosi, I read your quote and immediately heard it in his accent!

Mrs N, my friend went to the Dracula Experience! She said a vampire jumped out at them and said 'Boo'! LOL!

Almost forgot - Jabblog, just don't get me started on W H Smiths, my blood pressure goes up every time I go in there... Apart from The Works it's the only shop in the town where I work that sells books. Now Borders has gone too, I am bereft.

And yet another comment from me... I did my MA dissertation on the Gothic, and I'm fascinated about what supernatural literature says about our psychological make-up. And by the way, am I the only person who still says 'Crikey'? It's a terribly English thing isn't it? A bit Jeeves and Wooster!

I am not a special fan of vampires, but I love your cat vampire, real cute !

I must admit that vampires have never been quite "my thing", but that is probably my fault.

I'm not a vampire fan, but I do want to read Dracula one day. The Myers version doesn't tempt me at all.

@ Barbara - no, you're not the only one who says 'Crikey'. I do too! Although in my case it brings back childhood memories of Billy Bunter rather than Jeeves and Wooster!

I've never been a fan of vampires especially now that the genre has changed to that teenage angsty weirdness.

I loved Buffy. Jane got the whole family 'into' the series and we all watched avidly. But, as you say, it was fun.
I read a bit of one of Stephanie Meyers' books - a pupil was writing an essay on it and I had to show her something - and wasn't too impressed.
The vampires I LOVE these days, though are the two in Armstrong and Miller! Have you seen them? So funny! They turned up at a place where they'd heard there would be lots of virgins. It was a meeting of Alpha - a Christian group!
Penny

What a lovely vampire cat! In our cat blog, we posted another vampire cat!
I sort of like vampires.

Me and my sisters love watching vampire movies...We love the twilight saga..:-)But now i guess i love "pepper the Vampire Cat...LOL

Penny - I only managed to watch the first series of Armstrong and Miller so haven't seen the vampires, they sound great. I love the airmen too - 'harsh!'.

I love the airmen, too. I saw them on a charity show and that's what got me 'into' A and M.

Oops! Don't know how that happened! This is the correct one, I think...

Just watched it Penny - LOL, thanks! Love the tambourine playing at the end.