Cat of the week - not

We've decided that Charlie must have one of those faces that make other cats want to beat him up.  It happened frequently at our last house and we were forever having to take him to the vets to be stitched up.  We thought this had stopped once we moved but last week he appeared with an abscess on his back.  As it had burst I cleaned it up and thought it looked ok, then a few days later an ominous swelling appeared near it - yet another abscess!  I let David to take him to the vets on Monday whilst I was at work - poor old Charlie had to stay in all day, get knocked out, cleaned up, and injected with various things.  We picked him up that night along with a course of anti-biotics and a bill for £133!!!  (At least he's insured...).  He came home - ate - went out - came in - ate - went upstairs - came down - ate, then collapsed in a heap and went to sleep. He seems ok now apart from a bald patch on his back and a nasty looking wound, but refuses to take his tablets whole and has to have them crushed to a fine powder and added to food. 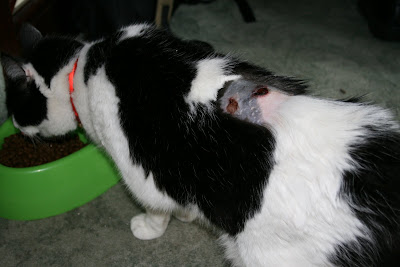 Charlie - wounded but still eating!
Yesterday I was just about to get in the car and go to work when David saw a hedghog run under it!  It then decided that just behind the front wheel was a great place to hide.  I took a picure of it on my phone whilst David ran for the gardening gloves and moved it to the back garden.  I gave it some cat food but it wasn't interested - although the cats were:  Pod went right up to the hedghog and sniffed it but decided the cat food looked a better option.  It was last seen legging it around to a neighbours - probably the catering facilities there were more to his taste. 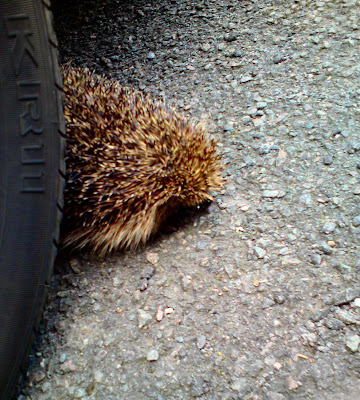 Probably not the best hiding place in the world...
Posted by Barbara at 07:57 No comments:

Email ThisBlogThis!Share to TwitterShare to FacebookShare to Pinterest
Labels: cats

It feels like I haven't stopped to think let alone sit down and relax this weekend.  Friday night we went to Stratford to see the RSC's Morte D'Arthur, which was an experience!  First the director Greg Doran came on and apologised for the fact they hadn't had time to do a full rehearsal as it was such a long play (it was on from 7.15pm until 11pm), and things did seem to keep going wrong techinically, and finally 15 minutes from the end Greg came back on and said he was stopping the performance as Sam Troughton who played Arthur had been taken ill.  He did look and sound awful - hope it was nothing too serious.  Visually the play was stunning, and the effects were so clever, well worth seeing.  The language is completely different to Shakespeare, none of the rich poetry, and the characters too are quite 'flat', but it really will be a wonderful production once they iron out the problems.
On Saturday we went to the Great Central Railway's World War II Event which was great fun.  Took quite a few photos and the only annoyance of the day was that as the event was spread over four locations, we had to pay £5 to go on the platform at Loughborough Station and another £5 to go into the event at Quorn Station too.  A bit steep methinks. It should have been £5 for the event, plus extra if you actually travelled by train. 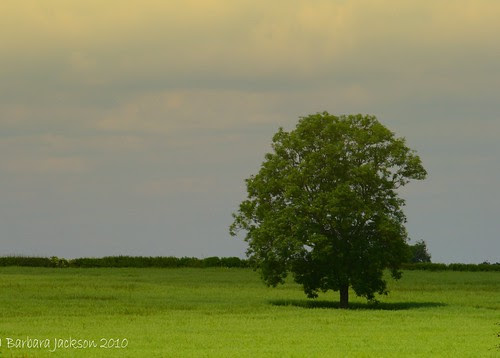 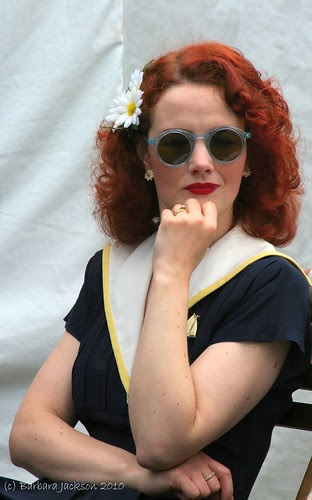 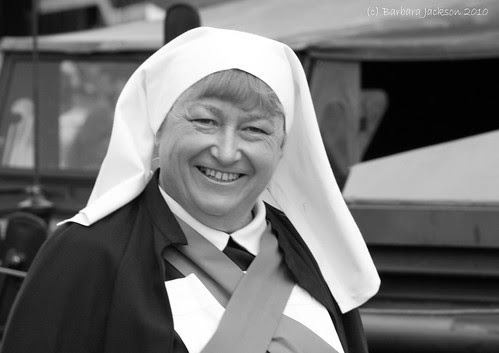 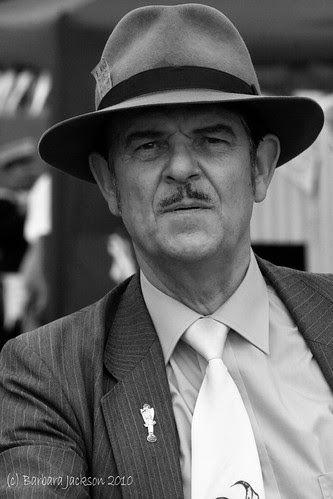 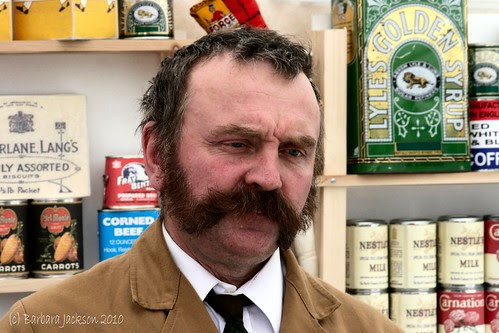 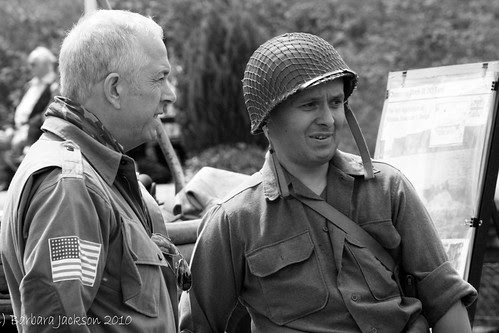 G.I.s
Today David kindly helped me with my fitness kick by coming on a 10km walk with me, and we did it in 1 hour 45 minutes!  I even had the energy to go shopping this afternoon and bought him a swiss roll in gratitude (he was shattered and had to go and lie down :O)), I also attacked two of our garden shrubs with shears (have probably killed them as I've no idea what I'm doing despite my Dad being a gardener), and pulled up some ornamental grass that was threatening to take over the front garden.  And tomorrow it's back to work...
Posted by Barbara at 17:02 2 comments:

Helen and I completed the Moonlit walk on Saturday night in 1 hour 50 minutes and had a great time doing it.  The atmosphere was wonderful with people in the streets cheering the walkers on.  About 400 ladies took part, and 3 dogs did it as well, I saw one wearing his medal at the end!  Helen had done a 7 mile run in the morning and then went swimming 8a.m. Sunday morning - I'm not sure if she's insane or just Wonder Woman!    It has to be said the breakfast after the walk left something to be desired, I had a remarkably wizened veggie sausage that was fished out from somewhere below a counter in a hot dog roll.  Still - it was a great night anyway.  We hope to do it again next year, and this time Helen wants us to take supplies of chocolate to eat en-route - not sure if my stomach could take a bar of Cadbury's on top of aerobic exercise, but what the heck.  I didn't have my camera with me (too heavy), but managed a few dodgy shots on my phone before the walk began.  Helen says she particularly likes the one of the back of her head as it makes her hair-do look glam! 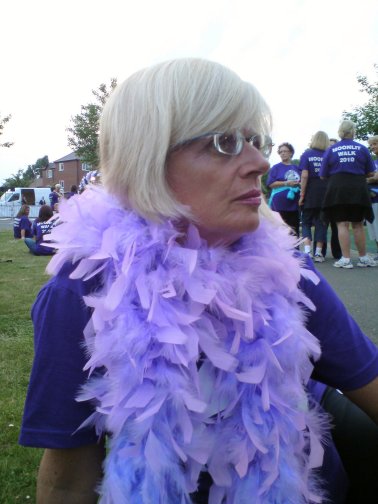 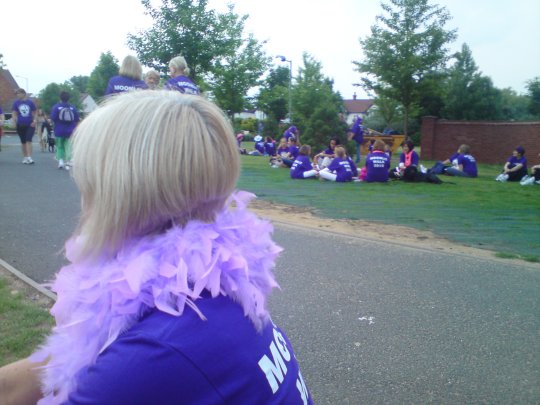 Helen with fab hair-do.  I was trying to get a picture of the black dog in the background!  Where is a DSLR with 200mm zoom lens when you need one? 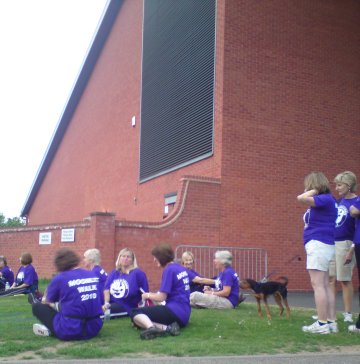 One of the dogs that took part with his 'team' 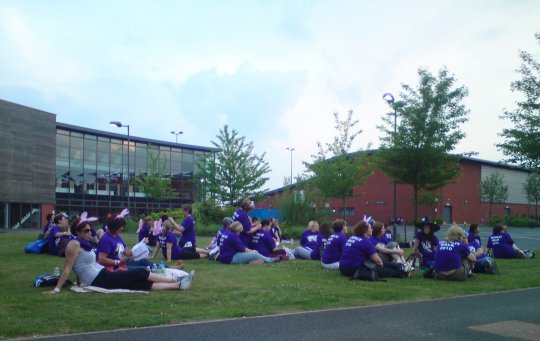 I loved the rabbit ears and the fairy wings 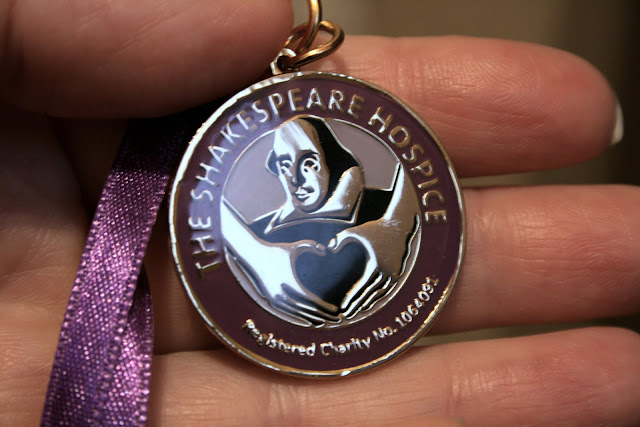 My first medal!
Posted by Barbara at 18:18 No comments:

Email ThisBlogThis!Share to TwitterShare to FacebookShare to Pinterest
Labels: walking

Why I was late for work yesterday...

I had every intention of being on time until I made the mistake of going outside to hang the washing out.  There was a heavy mist and it had left water droplets on everything, including the cobwebs which had appeared on the rotary drier overnight.  They looked so amazing I dropped the washing back in the kitchen and got the camera instead. 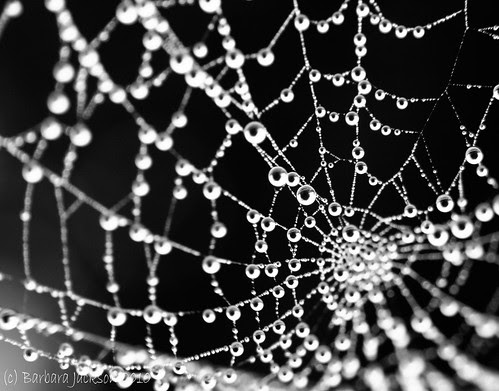 Email ThisBlogThis!Share to TwitterShare to FacebookShare to Pinterest
Labels: photography

Gambling on the weather and the traffic we headed off to Milton Keynes on Sunday for the 1940s Festival at Bletchley Park.  It's a fascinating place anyway but made more interesting by the re-enactors wandering around in period clothes (I think I would have blended in more if I'd worn Posky around my neck like a fox fur, as long as I'd kept on feeding him he'd have been happy).  Camera at the ready, I did pluck up the courage to ask some rather glam ladies to pose for me which they very kindly did, but on the whole I preferred the candid shots I took.  I like that natural look when people don't realise they're being photographed (I was obviously one of the paprazzi in a former life), or at least not being photographed by me.  The light was a bit unforgiving, it was VERY bright in the sun, but I was pretty pleased with some of the shots.  Very enjoyable day. 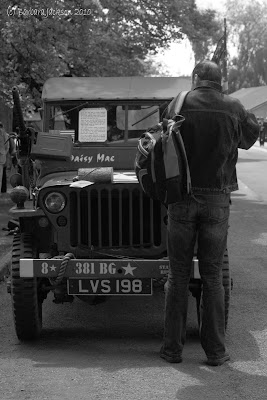 Some weird photographer bloke kept getting in the way of my shots, thankfully he flounced off after I berated him.  There's always one... 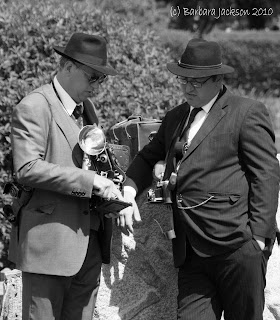 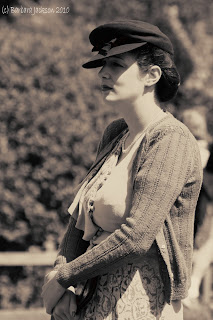 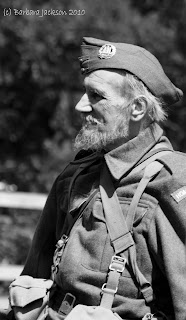 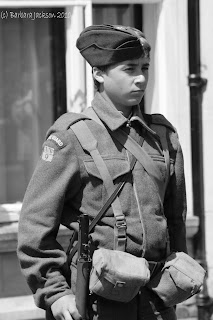 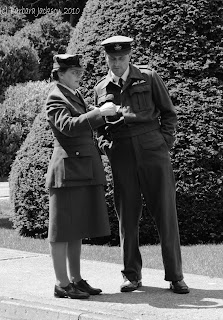 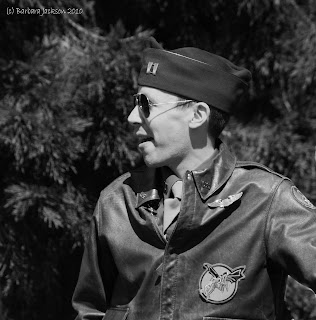 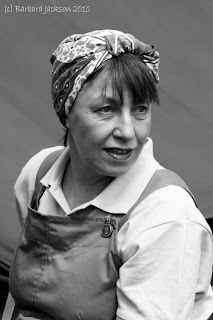