Two of my favourite things, a book and a film.  The first is a book of poetry by Carol Ann Duffy called Rapture, which I was first drawn to by its cover (the hardback version): red board with a silver illustration and writing - truly beautiful.  Rapture is a book of love poems, in fact it is as the description says 'a book-length love poem'. It chronicles a love affair, from the first infatuation and passion to the final separation, and is as beautiful, uplifting and heartbreaking as the process itself. 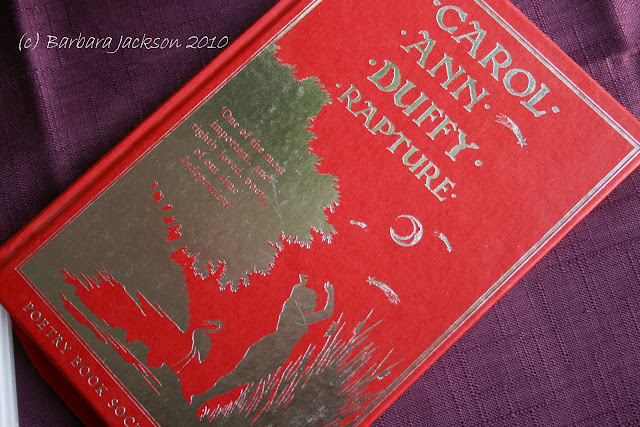 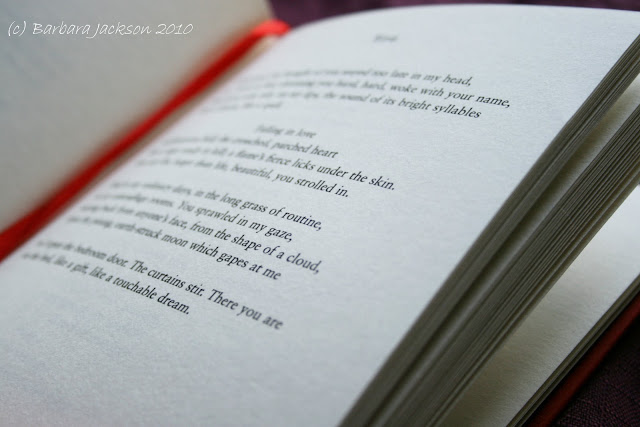 This is the first poem in the collection:

Uninvited, the thought of you stayed too late in my head,
so I went to bed, dreaming you hard, hard, woke with your name,
like tears, soft, salt, on my lips, the sound of its bright syllables
like a charm, like a spell,


Falling in love
is glamorous hell; the crouched parched heart
like a tiger ready to kill; a flame's fierce licks under the skin,
Into my life, larger than life, beautiful, you strolled in.


I hid in my ordinary days, in the long grass of routine,
in my camouflage rooms.  You sprawled in my gaze,
staring back from anyone's face, from the shape of a cloud,
from the pining, earth-struck moon which gapes at me


as I open the bedrom door.  The curtains stir.  There you are
on the bed, like a gift, like a touchable dream.


And this is the final one:


'That's the wise thrush; he sings each song twice over,
Lest you should think he never could recapture
The first fine careless rapture!'
Robert Browning


I wake to a dark hour out of time, go to the window.
No stars in this black sky, no moon to speak of, no name
or number to the hour, no skelf of light.  I let in air.
The garden's sudden scent's an open grave.
What do I have


to help me, without spell or prayer,
endure this hour, endless, heartless, anonymous,
the death of love?  Only the other hours -
the air made famous where you stood,
the grand hotel, flushing with light, which blazed us
on the night,


the hour it took for you
to make a ring of grass and marry me.  I say your name
again.  It is a key, unlocking all the dark,
so death swings open on its hinge.
I hear a bird being its song,
piercing the hour, to bring first light this Christmas dawn,
a gift, the blush of memory. 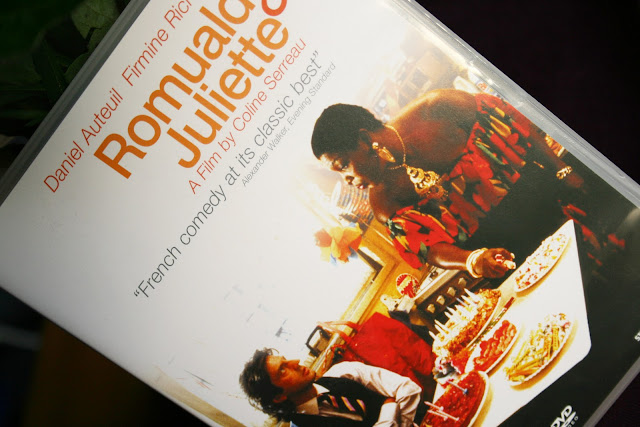 My second R is a film called Romuald et Juliette, which I first saw about twenty years ago and which has remained a favourite.  A french romantic comedy, it is the story of Romuald, a wealthy business man with a fabulous lifestyle, but married to a wife who doesn't love him, and with colleagues who are out to get his job.  It is also the story of Juliette, his black cleaning lady, married and divorced five times and living in a cramped apartment with her children.  It tells of how Juliette helps Romuald uncover the dirty goings-on in the yogurt business he runs, how she takes him in, helps him to save his career, but in the end is let down by him in her hour of need.  It is a gem of a film, funny, uplifting and heartwarming.  Can the story end happily with all finding true love and fulfilment?  Of course it can.
For more R words visit ABC Wednesday.

Your help needed urgently
We want to help these two kittties who are facing death by gas chamber - please donate or pass this on - Pogo and Ping Pong!
Posted by Barbara at 05:12

Wonderful post! I like the way Carol Ann Duffy uses unusual vocabulary and sentence structure without becoming precious.
The film sounds fun - must see if I can track it down to watch.

As I REALLY love poetry, I'm curious about this book, thanks so much for the REPORTAGE, you are always a great writer!
REGARDS
Léia

Terrific post for the R Day! I am curious about the book by Duffy and will look for it. The film does sound like fun, I'll try to find that one, too! Hope you have a great week!

Duffy seems to be a master of words and I agree the cover is very enticing. The movie sounds fascinating too. I think I wil have to check that one out.

RAPTURE! And I thought you were going with a more apocalyptic definition - I'm glad I was wrong.

And that movie is definitely intriguing.
ROG, ABC Wednesday team

I had the same reaction as Roger! Loved the poems you selected to share - romance is a fantastic "r" word, and it's great to be reminded that it still exists!

Wow! I'm not really into poetry, but I was overwhelmed by those two poems. The film looks intriguing, too. Might just check both these things out. :D

I am just coming into my poetry phase, and I really liked the poetry you shared with us. Nice choice for R day.

I have a blog I have devoted to poetry. It is my new hobby. It is here at, http://annsquotesandthings.blogspot.com

Please come by for a visit sometime.

So RAPTURE is a book of love poems?I initially thought of something else.. but boy, am I wrong. Hehe..

The poems are beautiful.. so full of emotions.. Loving it. Maybe I'd go check and see if they have this book in the bookstore near us.